To lay the groundwork for future growth in AI and analytics, life sciences, manufacturing, media and entertainment, and financial services, WekaIO has closed a $31.7 million series C financing round led by Hewlett Packard Enterprise (HPE), with participation from a host of storage and computing industry giants including Mellanox, Nvidia, Seagate, Western Digital Capital, and Qualcomm. 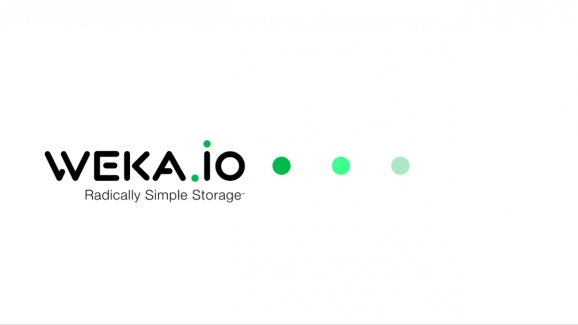 To lay the groundwork for future growth in AI and analytics, life sciences, manufacturing, media and entertainment, and financial services, WekaIO has closed a $31.7 million series C financing round led by Hewlett Packard Enterprise (HPE), with participation from a host of storage and computing industry giants including Mellanox, Nvidia, Seagate, Western Digital Capital, and Qualcomm.

Recommended Videos
Volume 0%
Blueprint York Fireside Chat: Impact of AI & automation on opportunities in the Heartland
How AI could change the future of our health care
New AI technology able to 'read' ones facial impressions
Futurist Warns of Dire Consequences from Corporate Control of AI

WekaIO says that the investment — which brings its total raised to about $73.7 million— will enable it to grow its engineering, sales, and marketing teams and to accelerate its international business expansion.

“This latest round of financing sets the stage for substantial growth and allows us to continue our mission to deliver an enterprise-grade HPC storage solution at cloud scale economics,” said CEO Liran Zvibel. “Modern workloads need a modern file system and legacy solutions just can’t keep pace. In under two years since our launch from stealth, we’ve been lauded with industry awards and accolades, been validated in production environments with leading enterprise organizations, and broken records on industry-leading benchmark tests beating out some of the world’s largest supercomputers.”

As Zvibel explained, Matrix is a software-based, virtualized solution that orchestrates clustering, tiering, snapshots, rebuilds, and more on WekaIO’s commodity server infrastructure, or on any x86-based on-premises commodity server, public cloud, or hybrid environment. It can be deployed as a dedicated storage appliance or hyperconverged on ethernet and InfiniBand networks, and its single namespace enables sub-millisecond latency (300 microseconds for reads and writes) on NVMe, SAS, or SATA storage distributed across up to thousands of compute nodes, millions of input and output operations per second, and petabytes of storage. Perhaps more importantly, Matrix offers fine-grained control through a console — Trinity — to dynamically scale performance independent of capacity based on app needs.

Matrix can automatically migrate data from a dedicated cold storage server to any compatible private cloud. For public cloud environments like Amazon Web Services, WekaIO’s self-service tools help configure instances based on app storage and performance requirements. In conjunction with Cloud Connector, an integrated cloud-bursting solution, WekaIO claims that Matrix can deliver over 4GB per second to a single GPU- or CPU-based server while maintaining twice the resiliency of RAID or triple replication.

Among other spotlight features, Matrix boasts prebuilt solutions for HPE, Supermicro, and Western Digital hardware and multiprotocol support that includes NFS and SMB. It’s compliant with POSIX, the family of standards specified by the IEEE Computer Society for maintaining compatibility between operating systems, and it supports disaster recovery features to mitigate data loss.

“With the increase of data-hungry and low latency AI applications in the enterprise, we see the combination of WekaIO’s cutting edge software running on Seagate’s multi-actuator based storage systems with a flash-optimized layer as providing the best [total cost of ownership] in the industry. We are excited to partner with WekaIO and look forward to a close relationship,” said Ravi Naik, senior VP of corporate strategy and CIO at Seagate. “Seagate’s mission is to maximize data potential, so we are excited to support the development of NVMe-native file systems like WekaIO Matrix that were built from the ground up to maximize the efficiencies of flash to support these modern workloads.”

“We are using [Matrix] over InfiniBand to address the challenges of data analytics at extreme scale in life sciences, particle physics, geosciences, and other fields,” said SDSC director Michael Norman.

You should know us before you choose us as your partners,
because we realize we need to earn the right to sit around your table.

Gemini prides itself on always being on the cuttin...